Our students are recognized by the US Congress

Growing out of a study of slavery and the abolition of international sales of human beings 200 years ago, students at Fort Lauderdale Prep launched an intensive study of human trafficking which is still going on in the world. According to State department estimates, 600,00 to 800,000 people are trafficked across national borders each year.

These students first attended a special showing of the movie, “Amazing Grace” which told the story about human bondage and one man’s twenty year effort to end it and was the inspiration for the well-known hymn. This was followed by intensive research on the subject, the beginnings of a fund raising drive to aid in ending this ugly practice, the development of a 10’ by 15’ mural , and an assembly featuring notables from agencies concerned about the problem. 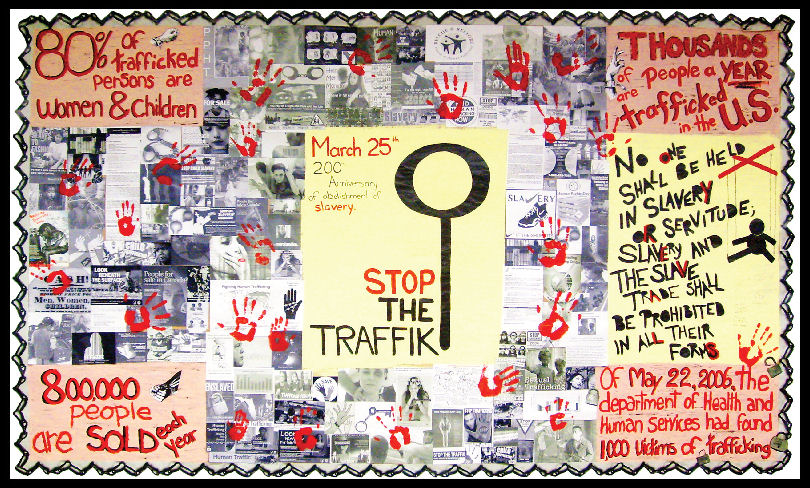 Lauding the class’ accomplishments, articles and photographs of our FLPS students with their projects were published in the Sun-Sentinel (click to view). An additional accolade came with an insert into the 110th Congressional Record (click to view) by Congressman Ron Klein, from Florida. Praising the efforts of these FLPS students, Klein commended these students “on their efforts to raise awareness on this issue and their passion and motivation are worthy of emulation.”

Also, the United States State Department and the U.S. Department of Education have become interested in this project, planning to forward pictures of the mural to other agencies and countries all over the world. Secretary of State Condoleza Rice was told about our project and said “Fort Lauderdale Preparatory School is a Star School.”

The work of this class and the end result of this study is a wonderful example of what education is all about.